Friday Night On Saturday morning. Well it's Saturday and yes yesterday was Friday. I know I totally missed a post after promising it, but you are still getting one just a tad bit late. Firstly I want to say that this post isn't sponsored and secondly Id like to say that when I started this blog in my About Section I promised transparency. So that's what I want to stick with. That said here is a look at my Friday.

My day started out pretty good, my kids were up before I was which on a school day is kind of nice because then I don't have to fight to get them out of bed and dressed. My daughter loves school but she has so much energy through the day and does so much that oftentimes in the morning shes a tad bit thunder cloudy. In other words cranky, but I can be so I can't really blame her for that.

Anyway yesterday was also my sons 6th Birthday ! So busy day ,
I got them to school then headed to work. On my way inside I ended up dropping my energy drink. Recently I made a very conscious but important decision to cut back on sugar and have stopped drinking soda and have been reducing the number of energy drinks I drink until eventually I no longer am drinking either except for maybe special occasions or days that I really really need that extra pick me up.

Well 3/4 of my mega monster ended up on the ground , outside my work. Before my day even began.

I'm a firm believer to try and not let certain things ruin your day. To control how you react to things if you can't control the things.

So inside I went. I had a custom cake that I was actually super looking forward too. Game of thrones themed. I havn't had the chance to watch it yet , but I may someday and I know some of the basics about the show. We have had a ton of superhero cake orders and while I love superhero's I was getting a tad burnt out on them. Anyway I also had some blizzard cakes to do and then my sons cake. Well , my sons cake the edible images kept ripping. Yeah. Well I ended up figuring it out and finally getting ONE image to not rip and on the cake. I thought . The image did rip it actually made it to where I had to put more on the cake than originally planned. BUT it still turned out pretty cute. Thankfully , the game of thrones cake turned out great. The writing could of been a tad better but after dropping a entire tub of Oreo's before starting that cake, I wasn't about to argue with the cake gods, and I truly hope that whomever ordered this cake did in fact love it as much as I did. Dragon footprint in snow with "blood" {cherry cone dip} all around. 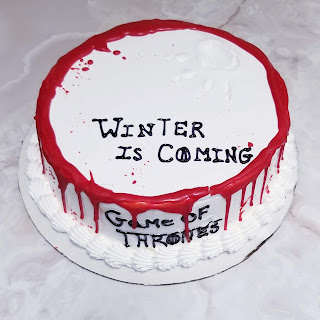 Now the blizzard cakes went smoothly other than the first one when I dropped all the Oreos.

l  got everything cleaned that I wanted too, and I got off in time to get my kids from school, get home , then go to a Drs. appointment for my knee. I have a meniscus tear in my left knee. Sometimes it hurts other times It doesn't. Eventually , Ill need surgery but for now , we are waiting on that. Instead I have been cortisone injections every 8-14 months. This made my 3rd.

Now after my appointment I got home and was stoked to cook my chosen recipe. Cheesy Chicken Bacon Packs.
They are so good. My little sister and I came up with the recipe 4 summers ago and now its a favorite of ours.

I got the bacon prepped. Had the ingredients out. Rinsed the dishes I was going to do as dinner was cooking and was ready. Ugh , was I ready. Phone charged for pictures and everything.

Yeah , my chicken breasts were spoiled.

So I ordered Dominos.

Now I'm getting ready to head to the grocery store with my two littles and get chicken breasts and stuff for dinner for everyone tomorrow while I'm visiting my little sister.

Shout out to the Seaside Dominos for saving dinner last night. We just got two pizzas no extras but previously we have had their stuffed cheesy bread and it was extremely tasty and their prices are so affordable!

So there you have it , one of my worst Fridays that most definitely could of been worse in a long time. Also the reason why I didn't write a post yesterday.

Now I look forward to writing and posting my recipe on Monday!

Have a good Saturday and Check back Monday! 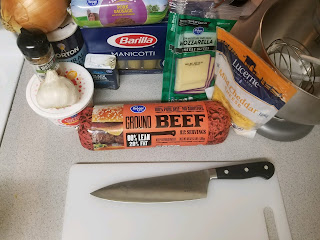 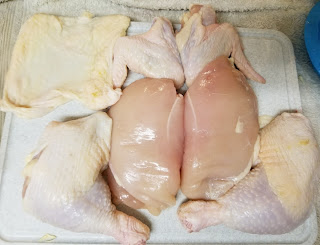